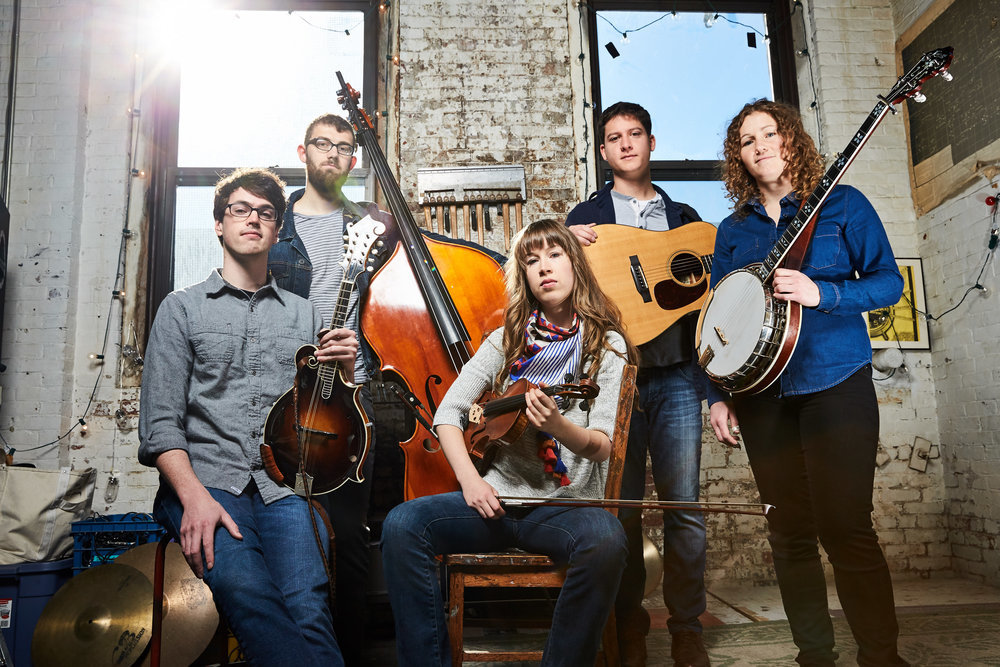 Since their formation in the fall of 2014, Mile Twelve has quickly been on the rise.  They released their debut 6-track self titled EP, and performed extensively throughout the U.S., Ireland and Canada, including several major festivals; Grey Fox Bluegrass Festival, FreshGrass Festival, Wind Gap Bluegrass Festival and Joe Val Bluegrass Festival.  A track from their debut EP was featured on Sirius XM Bluegrass Junction's "Hand Picked with Del McCoury", while another track was featured on Spotify's "Fresh Bluegrass" 2015 playlist. That same year, they were selected as formal showcase artists at the North East Folk Alliance.  The summer of 2016 has held more milestones for this young group: opening for Tim O’Brien at the Station Inn in Nashville, winning the Podunk Bluegrass Festival Band Contest and being nominated for a Momentum Award by the International Bluegrass Music Association and adding a fifth band member: mandolin player David Benedict. This winter they will be heading into the studio in Nashville to record their debut full-length album with producer Stephen Mougin at the helm.

"In recent years, Boston’s Berklee College of Music and New England Conservatory have added extra fire to that city’s already churning cauldron of traditional string players. Out of this spicy soup jumps Mile Twelve, a group of four accomplished bluegrass musicians who write, sing, and play like the wind. Serious players who have serious fun, Mile Twelve is a group to watch in the coming decade." - Tim O'Brien

"Mile Twelve has Bluegrass’ best interests at heart. Really good songs that mean something, picking that makes you grin and twitch, plenty of scalp-zinging moments... what more could you ask for America’s best drivin’ music? I’d be fine sending this to aliens." - Darol Anger

"Mile Twelve's instrumental skills reflect natural abilities enhanced by serious study of bluegrass tradition and a fearless desire to create fresh pathways.  From the opening number of their new EP, it’s plain that their vocal skills are equal to their picking prowess. Their trio blend is as tight as it gets.  Their duo and solo singing is equally praiseworthy. The arrangements often surprise with subtle twists and turns... delicious false endings, dropped beats, arco bass and fiddle duets, and on and on.  Mile Twelve is carrying the tradition forward with creativity and integrity." - Tony Trischka