What We Do Pricing Start Selling
Goldfinch Theater Company

"No Coast" written by Mike Draper 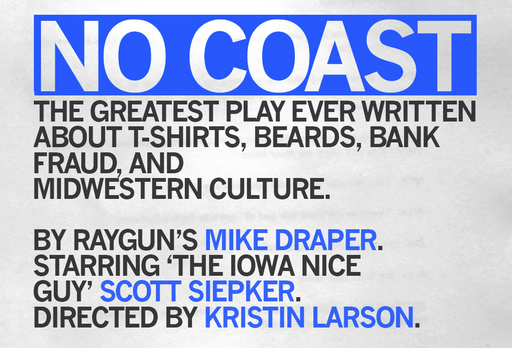 The first play ever written by Mike Draper, the owner and founder of RAYGUN, NO COAST is not the story of RAYGUN. Instead, the play is a reimagining of a store like RAYGUN, and all that goes into it.

“Since opening RAYGUN,” Mike explains, “I’ve been fascinated by the environment. People come and go regularly, and you’re building your own business world, though so connected to the world around you. NO COAST is a humorous look at t-shirts, beards, bank fraud, & Midwestern culture. It could very well be the greatest play ever written about t-shirts, beards, bank fraud, & Midwestern culture — and that is a crowded field of competitors!”

We guarantee it will be the greatest piece of artwork ever created by human kind. If you don’t buy tickets to see this play, you’ll be haunted by regret for decades to come.

Viking Theatre on the Campus of Grand View University